HIFU treatment (High-intensity-focused ultrasound) lifts and rejuvenates the face, neck, and other body areas by targeting deep structural layers of the skin. HIFU in Bangalore is a non-surgical technique that’s a favorite to many people because the rejuvenation effect is immediate and long-lasting, and there's no need for painful surgery.
HIFU facial treatment in Bangalore also known as ‘Ultrasound Facelift’ or ‘Ultherapy’, is a non-surgical facelift in Bangalore.

How does HIFU facial treatment work?

HIFU facelift in Bangalore uses focused ultrasound energy to lift the muscle and tighten the skin. The ultrasound generates low levels of heat in the targeted skin stimulating new collagen production, which in turn promotes skin tightening, keeping it firmed, toned and elastic.

At livglam clinic, the ultrasonic frequencies emitted from our advanced technology HIFU in Bangalore will pass through the dermis, converging up to 4.5mm beneath the skin causing the muscles to contract which tightens the skin and facilitates the production of elastin and collagen fibers.

With just 1 treatment, the results are remarkable and can last between 2 to 4 years. HIFU facial treatment in Bangalore relies on the body’s natural regenerative capacity, this method requires no creams, no products. This is the highest level of non-surgical technology available.

Can HIFU treatment be combined with other treatments?

HIFU treatment in Bangalore is used alongside other treatments to enhance results. For the best lifting effect, it is often used with Thread facelift to give an optimum result. Combination treatment with HIFU and fractional CO2 laser is safe and effective in face rejuvenation and aging and can be safely performed in a single session.

HIFU treatment in Bangalore has seen a major increase in popularity over the last years.It has become one of the most popular treatments for the face and neck which will help you achieve firmer and tighter, lifted skin. If you are looking for a quick, painless and noninvasive, HIFU is an excellent option compared to a surgical lift.

HIFU treatment in Bangalore has key advantages over surgical facelift;

However, HIFU in bangalore isn’t recommended for people with infections and open lesions at the target area, severe or cystic acne and metallic implants in the treatment area.

Schedule an appointment today at Livglam clinic doctors, to determine if HIFU is right treatment for you. HIFU treatment in Bangalore is one of the best treatments to prevent further ageing of the skin.

Suitability For HIFU facelift in Bangalore

HIFU therapy is suitable for someone who is over the age of 30 and has noticed some mild to moderate laxity skin on their face or neck has started to show signs of aging.
We choose patients carefully according to face shape with a heavier lower face, prominent jowls, or excess facial fats. The stimulated collagen production will help lift and tighten the treated area to help delay the aging process.

HIFU in Bangalore does the following:

HIFU facelift in Bangalore is not only highly effective, but it's also non-surgical, convenient, and safe too.
HIFU in Bangalore is only available in specialist centers because it is newer than some other treatments, it is a revolutionary alternative to cosmetic facelifts that require going under the knife.

In Livglam aesthetic clinic Jayanagar, one of the leading centers for anti ageing treatments, face lifts, and laser skin rejuvenation, you will receive the best HIFU treatment in Jayanagar Bangalore.

The HIFU facial treatment in Bangalore costs between Rs 25,000 to 60,000. You might get a detailed cost estimation after consulting an aesthetician based on the size of the area being treated. 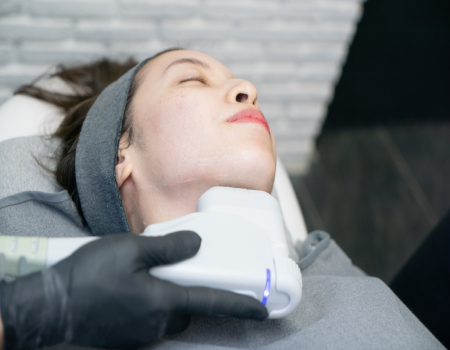 1. Why choose livglam for HIFU treatment in Bangalore?

Livglam clinic has been chosen and trusted to offer the best HIFU treatment in Bangalore due to our expertise, training and knowledge, and personable approach to every treatment. Check our former client reviews that they had good results post-HIFU facelift in Bangalore. Our aesthetician will go through your medical history during one-to-one consultation, give honest advice, and explain the treatment in detail.

2. How long does it take to see results?

After your HIFU facial treatment in Bangalore, you may see some initial effects like 20% results can be seen immediately, but the ultimate results will take place over 2-3 months, as your body naturally regenerates collagen.

Results of HIFU in Bangalore can last 1-2 years depending on your age, health, and lifestyle. We would recommend maintenance treatments or a touch-up session once a year for optimum continued results so that you can defy the ageing process gracefully with tight, youthful glowing skin.

4. How many treatments will I need?

HIFU treatment for facelift only requires a single session when done properly with the right HIFU handpieces. For double chin reduction, 1-2 treatments may be needed.

HIFU facelift in Bangalore is a relatively painless procedure, but still aestheticians can apply numbing cream to ensure the patient is comfortable during the procedure. But a good HIFU will cause some discomfort due to the high energy and heat generated to partially damage collagen structures, allowing them to repair over time to become tighter and firmer.

HIFU facial treatment in Bangalore is a safe and effective method for facial tightening and the procedure itself is very quick. Some clients experience slight swelling, tingling, or tenderness to the touch, but these are temporary in nature. But it is important to understand that ultrasound energy itself has been used safely worldwide in the medical field for more than 50 years.